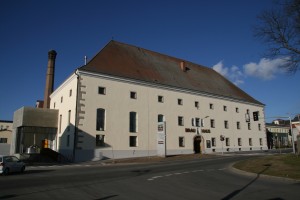 Freistadt’s history can not be imagined without the brewing community. The Habsburg Duke Rudolf IV granted the brewing license to the citizens of Freistadt in 1363. At first beer was brewed in different houses, but after some time they joined forces by creating the first early form of today’s inns. The duke’s privilege, however, was not purely unselfish: he demanded a so called “impost” of 10% for every mug of beer.

Little by little the citizens united into larger brewing groups, finally there was only one wheatbeer and one brown beer brewery left in the city. In 1746 the township acquired all brewing licenses. They founded the “brewing community” (Braucommune), in which 149 house owners from the old town have been and still are the owners of the brewery together. The brewing community proved its importance for the city outwardly by building a common brewery, which was inaugurated in 1777 and has been the place of business for the city’s most important company. Smart management and far-sighted decisions by the dynamic team succeeded in transforming the “old” brewery into an ultra modern, thriving, leading industry, which even has its own brewery restaurant today.