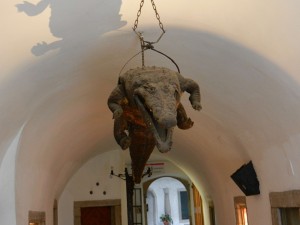 Shortly after the turn of the century a crocodile escaped from a circus, which was giving a performance in Freistadt, and Freistadt’s hunters shot it in a huntsman like manner, others even say, it died a natural death. The grocer Kaspar Obermayr asked for this trophy to get it stuffed. He hung it up in the passage of his house and always told people that he had strangled the crocodile with his own hands on the Nile in Egypt.