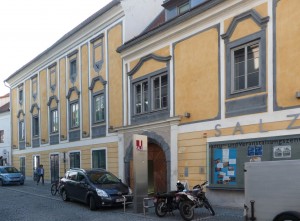 Following Salzgasse we reach the oldest building in town, the “Old Fortress”, later on called Salzhof. The city’s first fortress was mentioned for the first time in 1390. At the back, facing towards the city moat, there are the remains of the tower, which was destroyed in a fire and has not been reconstructed completely. The building functioned as a salt depot. The horse-drawn railway, which was built in the 19th century, bypassed the city, so the Salzhof was no longer needed as an interim storage. It was sold. In 2003 the courtyard was completely renovated and converted into today’s cultural centre. Furthermore this historic building is home of the provincial music school.