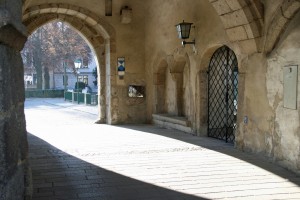 Freistadt’s medieval fortifications count among the best preserved city fortifications in Central Europe. The city was founded by Leopold VI, Duke of Babenberg on an important trading route. Together with the new settlement, the fortifications consisting of walls with a moat and a wooden palisade were set out as well. When the new fortress was built in the north-western part of the city, the whole fortification system was largely rebuilt in the second half of the 14th century and later completed with a couple of fortified towers and entrance gates.

The fortifications consisted of six defensive elements: the external wall, the city moat, the outer city wall, the outer ward, the inner city wall and the line, a free space between the inner side of the city wall and the first houses. The first defence line was a stonewall at the outer side of the moat. The most demanding work in the construction of the city’s fortifications was the digging of the moat, even if some of the stones which were dug out were used to build the city walls. 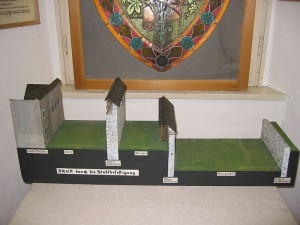 The outer city wall at a height of 8-9 m was the highest city wall. It still exists all around the whole city, in some places even at its original height. A wooden, roofed wall-walk was situated at the balustrade of the wall, which was structured by embrasures. The outer ward was situated between the outer and the inner city wall, as a flat, unstructured area, where constructions were absolutely forbidden for centuries. The seven metre high inner city wall still exists only in parts. There the balustrade was structured by embrasures and segmental projecting bastions. The line, which was an originally free space on the inner side of the fortifications, was already used in the late Middle Ages for the erection of small, flat buildings. However, they were not allowed to limit the wall-walk.

The bastions were also part of the fortifications, protecting the access to the city gates and being redesigned for the last time in the baroque period. When the fortifications were rebuilt in the second half of the 14th century, the semicircular towers Bürgerkorpsturm and Weyermühlturm (meant for the protection of the city mill) were built. In the context of the fortifying works after the Hussite Wars, the round towers Scheiblingturm and Dechanthofturm were built in the 40s of the 15th century to protect the stonewalls, which dammed up the water in the castle moat. With a system of dams on the sloping ground it was possible to fill the moat with water in case of the threat of war. In the last third of the 15th century the stonemason Mathes Klayndl built two city gates, Linzertor and Böhmertor, and a gate for pedestrians, Posttürl (post gate). The most recent tower of the city is the Town Hall Tower, which served as a powder tower.

In the second half of the 18th century Freistadt’s city walls lost their function due to the modernisation of firearms and became progressively a source of cheap construction material. After the fire of 1815 the semicircular tower in the corner was demolished and the Salzhof tower was reduced. The complete demolition and removal of the post gate in the east of the town was decided after another fire in 1887. Böhmertor still exists as a torso after the destruction of the inlaid wooden construction in a fire.